The Indian transfer pricing regulations were enacted via the Indian Finance Act 2001 by introducing  a separate code under Sections 92 to 92F of the Income- tax Act , 1961 (‘the Act’) read with Income- tax Rules, 1962 (‘the Rule’s) 10A to 10ETHD. The regulations are largely and principally based on OECD guidelines and describe the various transfer pricing methods, requirement for transfer pricing documentation, and contain penal provisions for non-compliance. The Indian regulations deal with intra-group transactions and is applicable from April 1, 2001.

Need for Transfer Pricing in India

With the emergence of era of liberalization and globalisation, there has been an increase in the number of cross-border transactions, complexity and speed with which global business could be transacted.

When transactions are entered into between independent enterprises, the consideration is determined by market forces. However, when associated enterprises deal with each other, there is a possibility that the commercial and financial aspects of the transactions may be influenced by factors other than market forces.

The existence of different tax rates and rules in different countries may give a chance to multinational enterprises to arrange their transfer prices to recognize lower profits in countries with higher taxes and vice versa. This may reduce the average tax payable by the multinational group and increases the after tax returns which in turn could be distributed to shareholders. In India ,earlier the Act had not dealt with this problem in a detailed manner. The Finance Act 2001 recognized this issue and introduced the provisions of Transfer Pricing in India to curb such practices.

The Indian Transfer Pricing Regulations prescribes that income arising from “international transactions” between “associated enterprises” should be computed having regard to the “arm’s length price”. It has been clarified that the allowance for any expense or interest arising from an international transaction shall also be determined having regard to the ALP.

Section 92B of the Act defines the expression “International Transaction” to mean a transaction between two (or more) AEs involving sale, purchase, or lease of tangible or intangible property, provision of services, cost sharing arrangements, lending / borrowing of money, or any other transaction having a bearing on the profits, income, losses, or assets of such enterprises. The AEs could be either two non-residents or a resident and a non-resident.

Until March 2012, Indian TP regulations were applicable only to international transactions entered into with associated enterprises. Considering the suggestions made by the Supreme Court in India in the case of Glaxo SmithKline Asia (P) Ltd., the application of transfer pricing regulations has been extended to specified domestic related party transactions as well.

As per Section 92BA of the Act, Specified Domestic Transaction essentially include transactions with undertakings to which profit linked deductions are provided covering inter-unit transfer of goods and services; and transactions between entities having close connection. Accordingly, the taxpayer would be required to undertake annual Transfer Pricing compliance in respect of the specified domestic transactions if the aggregate of such transactions exceeds INR 20 crores in a financial year.

For the purpose of this definition, certain other specific parameters have been laid down, based on which two enterprises have been deemed to be AEs (In total 13 parameters, that have been summarised below). These include:

Section 92F of the Act, defines Arm’s Length Price as the price that is applied or is proposed to be applied to transactions between persons other than AEs in uncontrolled conditions. Such price is determined by using the most appropriate method out of the following prescribed methods, The ‘Most Appropriate Method’ is that method which, under the facts and circumstances of the transaction under review, provides the most reliable measure of an arm’s length result: 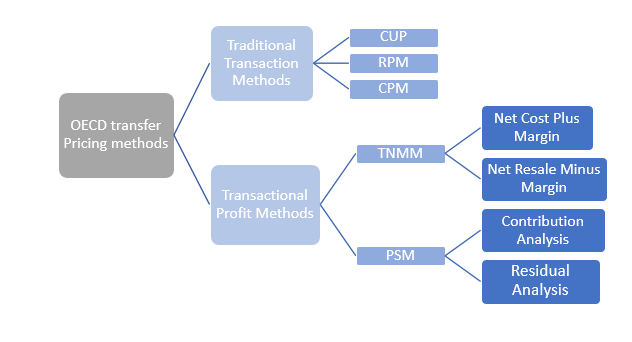 Provided that the combined net profit referred to in sub-clause (i) may, in the first instance, be partially allocated to each enterprise so as to provide it with a basic return appropriate for the type of international transaction in which it is engaged, with reference to market returns achieved for similar types of transactions by independent enterprises, and thereafter, the residual net profit remaining after such allocation may be split amongst the enterprises in proportion to their relative contribution in the manner specified under sub-clauses (ii) and (iii), and in such a case the aggregate of the net profit allocated to the enterprise in the first instance together with the residual net profit apportioned to that enterprise on the basis of its relative contribution shall be taken to be the net profit arising to that enterprise from the international transaction.

The Regulations provide no priority of methods. Rather, the selection of the pricing method to be used to test the arm’s length character of a controlled transaction must be made under the ‘Most Appropriate Method Rule’. The ‘Most Appropriate Method’ is that method which, under the facts and circumstances of the transaction under review, provides the most reliable measure of an arm’s length result.

The Regulations require a taxpayer to determine an arm’s length “price” for all international transactions. It further provides that where more than one ALP may be determined by applying the most appropriate Transfer Pricing method, the arithmetic mean of such prices shall be the ALP of the international transaction. Accordingly, the Indian Regulation does not recognize the concept of “arm’s length range”, but requires the determination of a single arm’s length “price”. However, some flexibility has been given to taxpayers in case the arithmetic mean of uncontrolled prices falls within (+/-) 3% range around the actual transaction price.

In determining the reliability of a method, the two most important factors to be taken into account are

As per the recent notification by the CBDT, range concept has been introduced to benchmark the transactions under consideration. The highlights of the new notification are as follows.

The Indian Finance Act, 2019 introduced following amendments in the section 92CE of the Income-tax Act, 1961 (the Act):

With a view to address the large scale litigation in TP, the Government has introduced Advance Pricing Agreement (APA) in the Finance Act, 2012 with effect from July 1, 2012. An APA is an arrangement between the taxpayer and the tax authority made prior to actual transactions, with a view to solve potential taxation disputes in a cooperative manner. The taxpayer and tax authority mutually agree on the transfer pricing methodology to be applied over a certain future period of time.

An APA seeks to determine an appropriate set of criteria for the computation of the transfer price, which may include the TP method to be applied, characteristics of comparables to be used, adjustments to be made to the taxpayer’s results for a fair comparison with comparables, critical assumptions as to future events, etc. The Central Board of Direct Taxes (CBDT), with the approval of the central government, has been empowered to enter into an APA with any taxpayer undertaking international transactions to determine the arm’s length price or specifying the manner in which arm’s length price shall be determined.

The APA so entered shall be binding on the taxpayer and the tax authorities in respect of the transaction covered under the agreement. Such agreement shall be valid for a period not exceeding five years.

Section 92CB of the Income tax Act defines “Safe Harbour” as circumstances in which  the tax authority shall accept the transfer price declared by the taxpayer to be at arm’s length price. Rule 10TE of Income tax Rules, 1962 prescribes the relevant rates of Operating Margin to be maintained as Transfer Price.

As per section 144C, the DRP under the Act is an alternate dispute resolution mechanism for resolving the disputes relating to Transfer Pricing. It is a collegium of three Commissioners of Income Tax constituted by CBDT. Section 144C comes into picture when the Assessing Officer proposes to make any variation in the income in the income or loss stated in the return filed by the assessee. An Assessee under section 144C refers to  Foreign company and/or any person in where the AO proposes to make any variation in the returned income or loss as a consequence of the order passed by the Transfer Pricing Officer under sub section (3) of  Section 92CA of the Act.

The DRP was formed with a view to provide  speedy and appropriate directions to the assessee at the first level of appeal itself. Thus, it has to complete the hearing and give its final directions within a period of 9 months. The directions given by the DRP are binding on the AO, however the said directions can be challenged before the Income Tax Appellate Tribunal, and then before HC, and Supreme Court

Section 94B has been inserted with effect from Assessment Year 2019-20 providing for limitation of deduction of interest in certain cases.

The Section applies if all the following conditions are satisfied:

If the aforesaid conditions are satisfied, then:

Taxpayers are required to maintain the prescribed information and 3 – tier documentation as part of their transfer pricing documentation to demonstrate that the pricing policy complies with the arm’s length principle.

BEPS Action plan 13 proposes the concept of  3- tier documentation which includes the following:

Documentation should be kept and maintained for nine years from the end of the relevant tax year.

It is mandatory to obtain an independent accountant’s report in respect of all international transactions between AEs and furnish the report within the due date of filing the income tax return. The form of the report has been prescribed. The report requires the accountant to give an opinion on the proper maintenance of prescribed documents and information by the taxpayer. Further, the accountant is required to certify the correctness of an extensive list of prescribed particulars.

The due date of furnishing Accountant’s Report has been amended to the date one month prior to the due date for furnishing the return on income under sub-section (1) of section 139 for the relevant assessment year.

The following penalties have been prescribed for default in compliance with the provisions of the transfer pricing code:

The author is Founder and Practice Lead at TransPrice Tax Advisors LLP, India.