This Amendment Bill (which became law on July 13, 2018) specified the documentary requirements from a transfer pricing perspective and also introduced measures to address various recommendations under BEPS Action Plans.

This article is intended to lay down the key elements of the new transfer pricing regime in Hong Kong and our comments on the areas that companies’ management ought to deliberate to adhere in terms of the regulatory transfer pricing compliance.

The IRD has been empowered to impose transfer pricing adjustments on either income or expense arising from non-arm’s length transactions between associated persons that lead to a potential Hong Kong tax advantage.

The rules are effective from assessment year starting April 1, 2018.

Additionally, the ALP applies to all types of tax, including profits tax, property tax, and salaries tax. Hong Kong adopted a scheduler income tax system, which is different from the comprehensive income tax regimes of several overseas’ tax jurisdictions whereby all the sources of income are aggregated for assessment purposes.

Attribution of profits to a permanent establishment

Specific provisions have been introduced, which apply to any non-resident who has a permanent establishment (PE) that carries on a trade, profession, or business in Hong Kong. The guidance on attributing income/loss to a PE is based on the Authorised OECD Approach (AOA).

The IRD has clarified that its long-established Territorial Source Principle of Taxation will continue to apply to determine the chargeability of income or profits to Hong Kong tax. Therefore, this provision will not limit or alter the conditions for charging profits tax, which means that only those attributable profits that have a Hong Kong-based source will be subject to tax.

Particular relevance to financial institutions, banks, and insurance companies that often maintain Hong Kong branches, since the PE in Hong Kong, was not specifically compensated in the past. This is also the reason why the implementation was delayed by 12 months.

IRD has deferred implementation of this provision by one year to allow sufficient time for taxpayers that require a transition to using the AOA.

More guidance is due on the application of this provision.

IRD could impose a tax on the Hong Kong taxpayers if they have carried out value creation activities, such as development, enhancement, maintenance, protection or exploitation (DEMPE) functions in Hong Kong that contributed to any intellectual property (IP) held by an overseas related party. The rule is applicable to assessment year starting April 1, 2019.

The taxpayers should ensure compliance with the arm’s length principle and properly document the transfer pricing position of their IP strategy in view of the potential tax uncertainties that arise. Furthermore, the effective date has also been deferred to give more time to the groups to analyse the implications and take necessary steps. 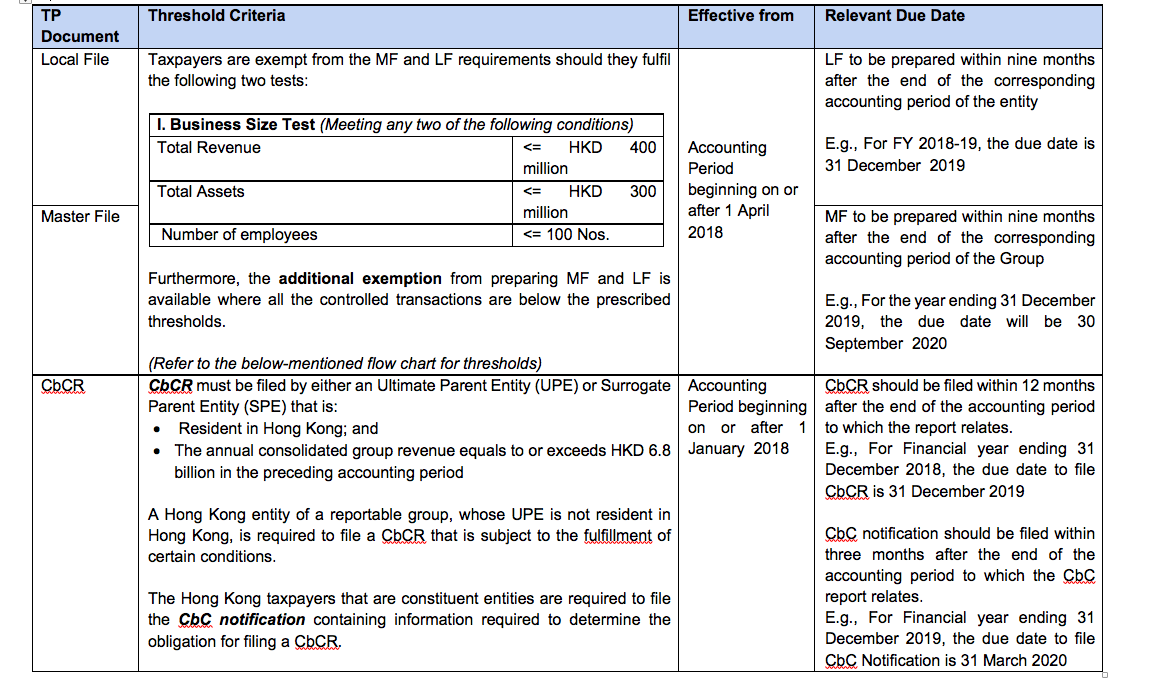 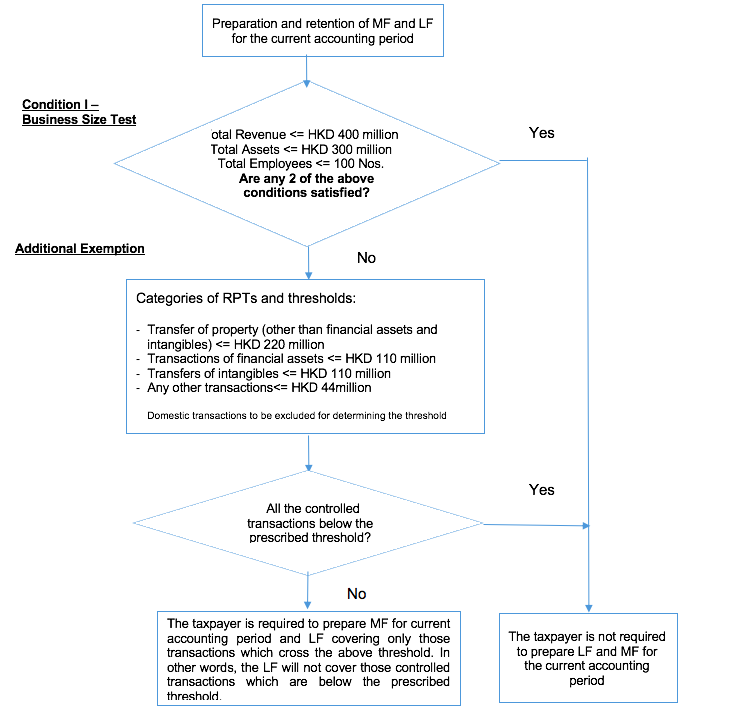 Hong Kong subsidiaries of multinational enterprises (MNEs) may rely on the master file prepared by the Group. However, the IRD requires the master files to be produced in the English or Chinese language. In case the relevant versions are unavailable, it may lead to additional effort for the Group by making available the master file in the prescribed languages.

Local filing of CbC report for foreign-headquartered MNE may be required in Hong Kong unless information exchange agreements are in place.

The Ordinance puts in place a statutory advanced pricing arrangement (APA) regime, which allows for unilateral, bilateral, and multilateral APA applications. Certain changes have been made to introduce fees chargeable by the IRD to applicants, including hourly service charges for time spent by IRD officials processing applications. The service charge in respect of fees for an APA application should not exceed HKD500,000.

The APA program is open to all the residents and non-residents with a permanent establishment in the country, subject to profits tax and having related party transactions in Hong Kong. Furthermore, rollback of transfer pricing methodology for APA purposes to prior years depending on the circumstances of each case has also been made available.

If a taxpayer has adopted non-arm’s length pricing for its related-party transactions and is unable to demonstrate that it has exercised reasonable effort to determine the arm’s length price for such transactions, the IRD is empowered to impose a penalty by way of additional tax not exceeding 100% of the amount of the tax undercharged.

The penalty for transfer pricing matters is less than that imposed for incorrect returns and other matters under Section 82A of the IRD (i.e.300% of the amount of the tax undercharged).

As jurisdictions, including Hong Kong, begin to focus on the enforcement of transfer pricing laws and regulations, it could be reasonably anticipated that the result would be more disputes and double tax issues that would need resolution. To ensure effective resolution of these disputes, the regime provides for a statutory dispute resolution mechanism whereby:

It is, therefore, important for Hong Kong entities to be well-coordinated with its related counterparts, to monitor the issues and progress of each other’s transfer pricing audits and to ensure that the concerned competent authorities are duly notified. This would help in soliciting their involvement at appropriate moments for speedy and amicable resolution of disputes.

The deadline for applying for corresponding adjustments have been extended to the later date of:

Pertinently, a taxpayer is required to give a written notice to the IRD within three months from the date of such an adjustment.

OECD’s 2019 Peer Review Report on the Exchange of Information on Request rates Hong Kong as “Largely Compliant” on access to information and the extensive extension of its network of exchange partners. It is expected that the Hong Kong authorities will focus on transfer pricing in the coming years and the taxpayers are recommended to consider the following:

Given the above, there does exist uncertainties as to the interpretation and practical application of the aforementioned transfer pricing provisions emanating from the Ordinance. Furthermore, the guidance is expected in the coming months from Hong Kong’s IRD through new/updated DIPNs, which would provide further clarity.

With the introduction of the transfer pricing rules and enforcement of various tools to measure BEPS, the multinational enterprises operating in Hong Kong will have to be better equipped in terms of a robust documentation by way of a three-tiered structure, which is not only accurate but also represents profits being in sync with the value chain.

With tax authorities having access to significant information, the challenges arising due to detailed scrutiny have a far-reaching impact on the multinationals.

Companies should involve various stakeholders to revisit transfer pricing policies and tax structure positions with respect to their supply chains and use of IP. Furthermore, the related-party transactions undertaken need to be ensured to meet arm’s length criteria to ensure compliance with local laws and plug any probable issues that may arise in future on account of PE.